Christine Karapetian collages a wide range of materials, including wood, material, paint, and fabric in her exquisite paintings. Her visual art immediately spoke to me on spiritual [Kandinskian Considering the Spiritual in Art], emotional, psychological, aesthetic, and sublime levels. The title of this amazing virtual show that I am honored to feature–also resonates deeply with me. Like Christine, I had a deep connection to my late father who shaped me as a literary artist/human being.

On a personal note, which explains the founding of Diaphanous in February, 2017 and diaphanous micro in 2018-, this free platform for visual and literary artists to share their work with an engaged and captivated audience–

I was determined to be a painter as a child and also, like Christine, have fond memories that go back to kindergarten of creating art, painting, gluing, cutting, drawing. . . . However, my non-artist father who was deported with his family for two long years in Siberia–put a kibosh on any plans of mine to pursue a non-lucrative art degree. They had almost starved many times, so why would he permit his daughter to become a starving artist?

As a result of my father and his peers losing their right to continue their educations for two years, he emphasized education and literally afforded me quite an extensive one in the esoteric field of twentieth-century American poetry and poetics. A large part of my research and focus was/is on the symbiotic relationship of visual artists and poets. In my own poetry, I treat the page like a canvas, often a collage or sculpture–and perceive the composition of the poem, short fiction, or novel– as its own world that incorporates/utilizes light, color, tone, image, fragment, found cultural objects, etc. Instead of using paint and other visual media like visual artists such as Christine–my brushstrokes are composed of deconstructivist morphemes and phonemes [because of the Language poets that went before me]–gathered into syntactical (though I often play around with/break syntax to define it–as Christine plays with the syntax of her visual compositions) string necklaces of syllables, phrases, sentences. . . .

Because of Christine’s father’s cultured love of all the arts (see her biographical note) and Armenian background with which he was in dialogue with against the American backdrop/culture [like my own father’s connection to Poland and the world through his post-Siberia exile/wandering before settling in the United States]–she was free/given “permission” to explore her creativity and dual cultural identity, attend college to study painting, and in doing so–create visual objects that function as testaments to her/and by extension the viewer’s complex human experience.

During our troubling current times and the ongoing “mess” at the US-Mexican border where impoverished political refugees, separated from their own family members (so many of whom are young children), await their fate while sandwiched in unsanitary cages, the theme of emigration (from a violent homeland) and exile in Christine’s work should resonate with all of us.

Special thanks to Mark Blickley, NYC renowned text-based artist (writer of very short fiction/visual artist, depending how he feels at the moment), for introducing me to Christine’s visual masterpieces. It was a pleasure getting to know her as we collaborated together on this issue of diaphanous micro.

Please enjoy this stunning virtual art show of Christine’s latest work: my father was to tell me something. 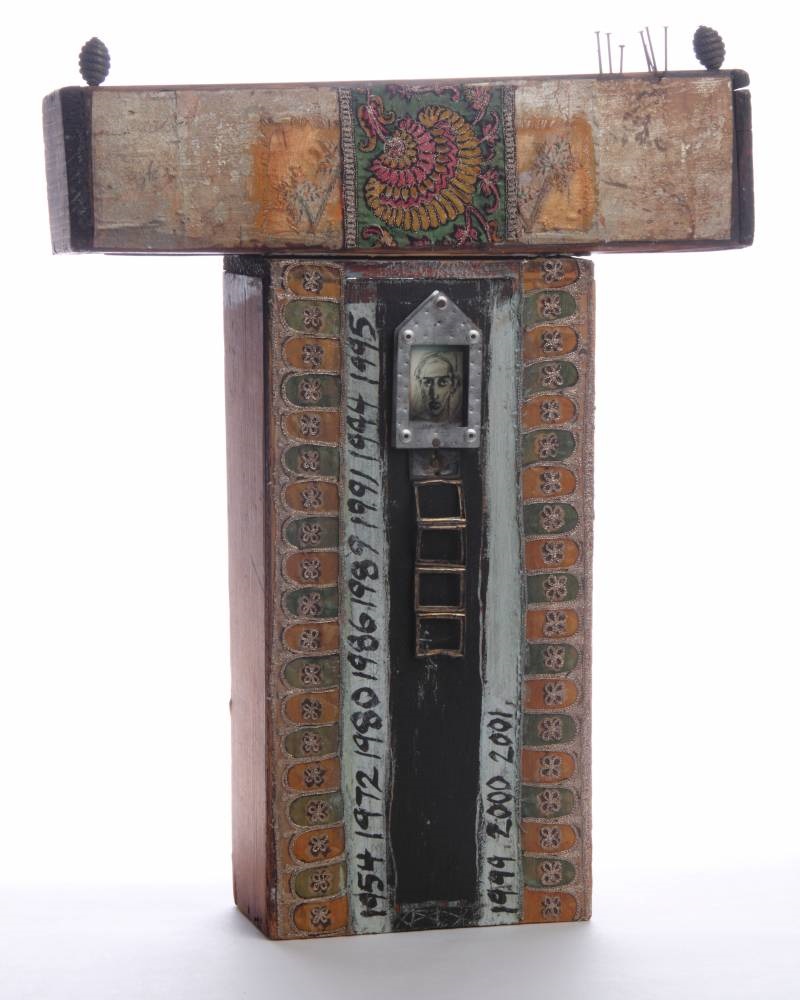 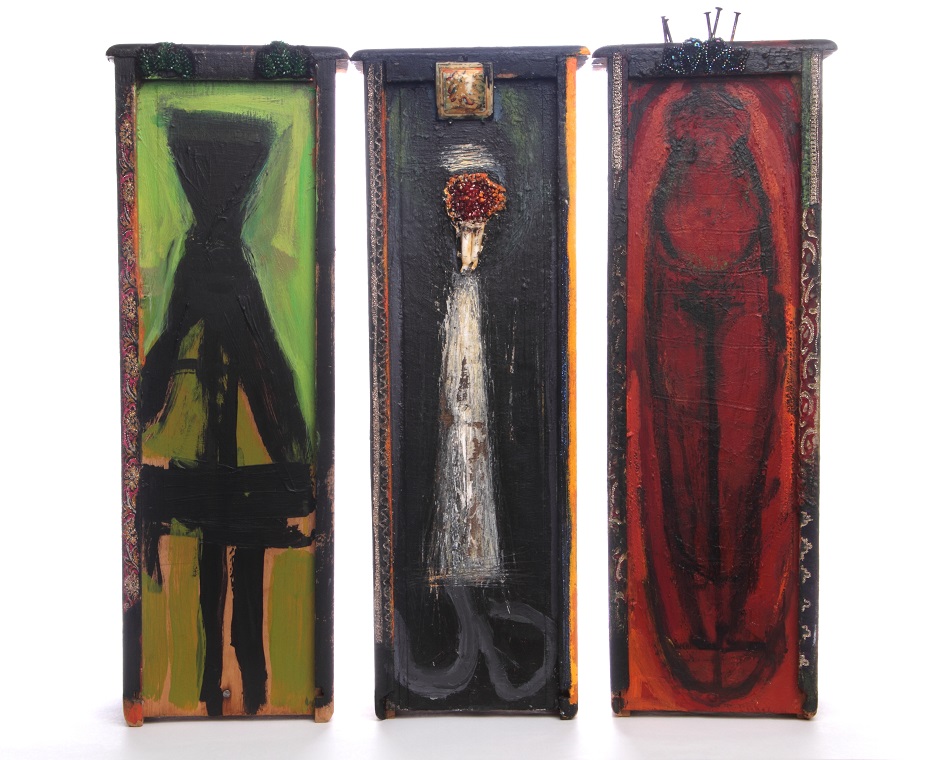 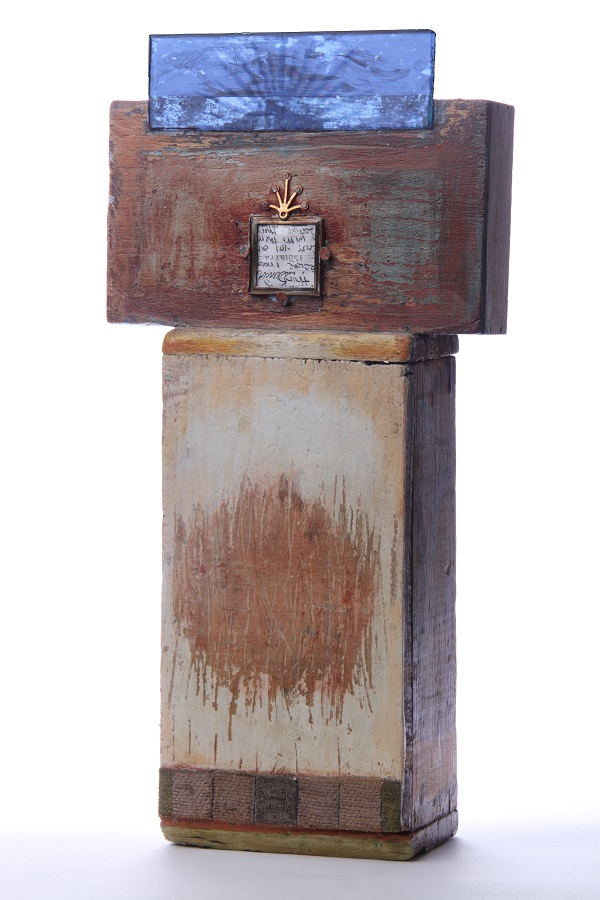 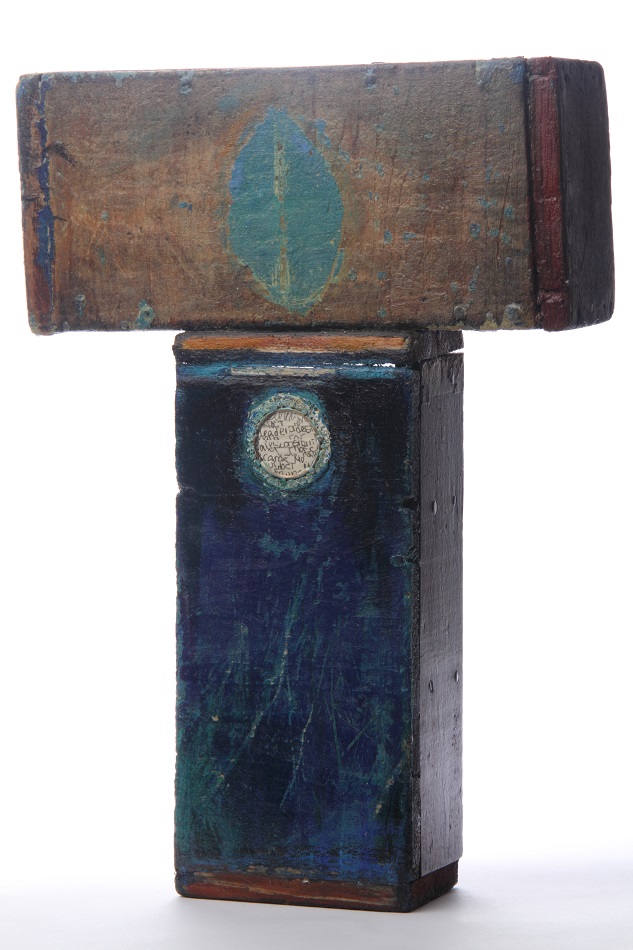 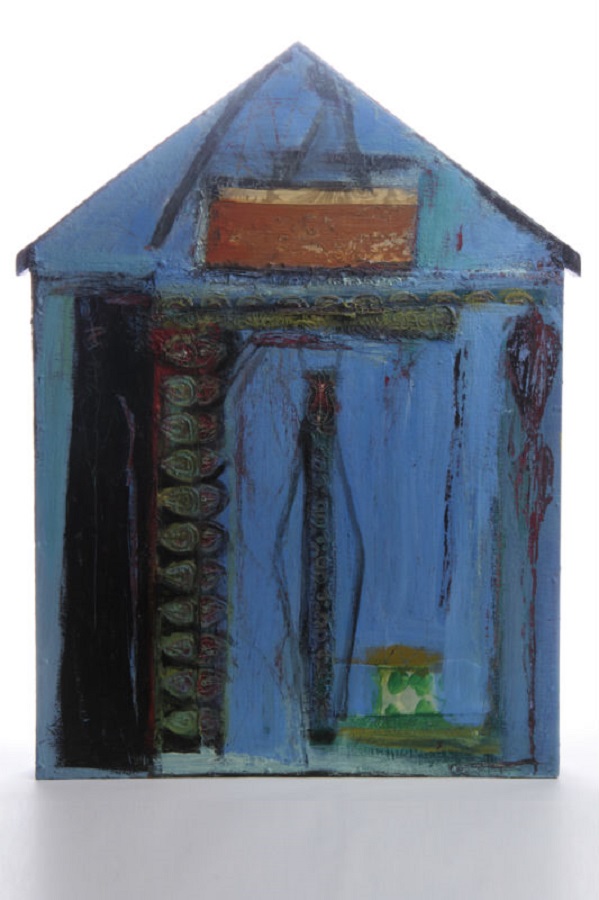 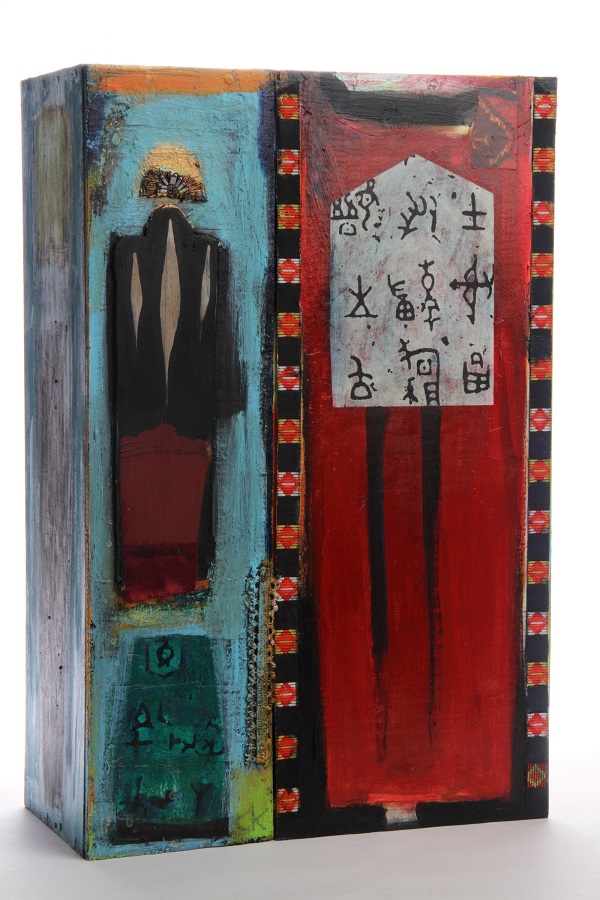 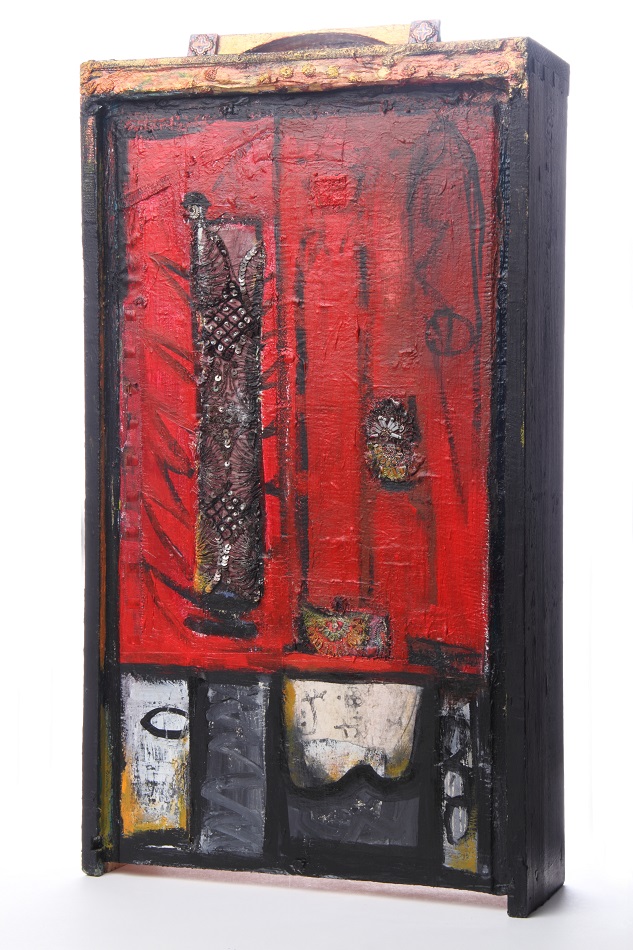 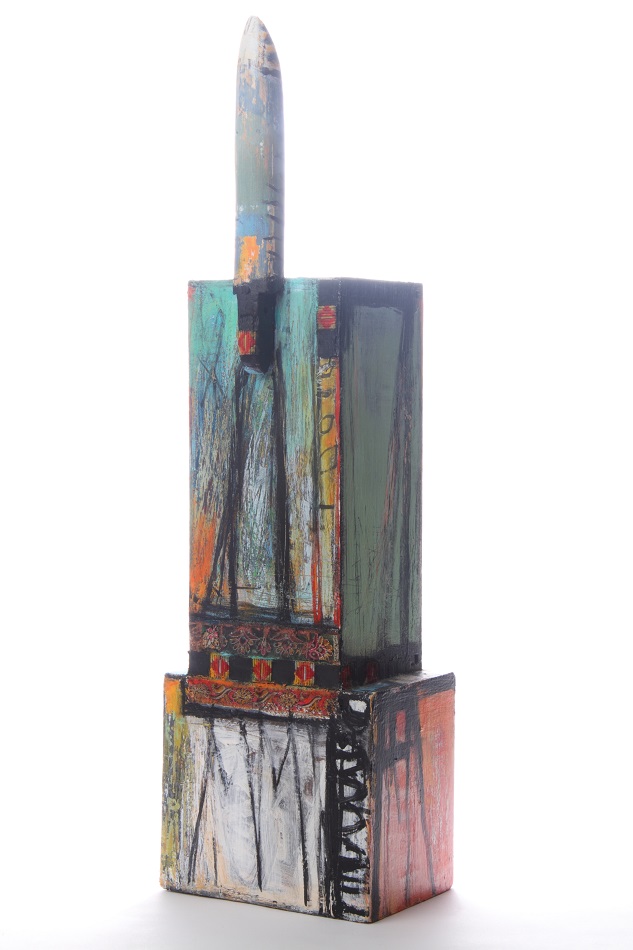 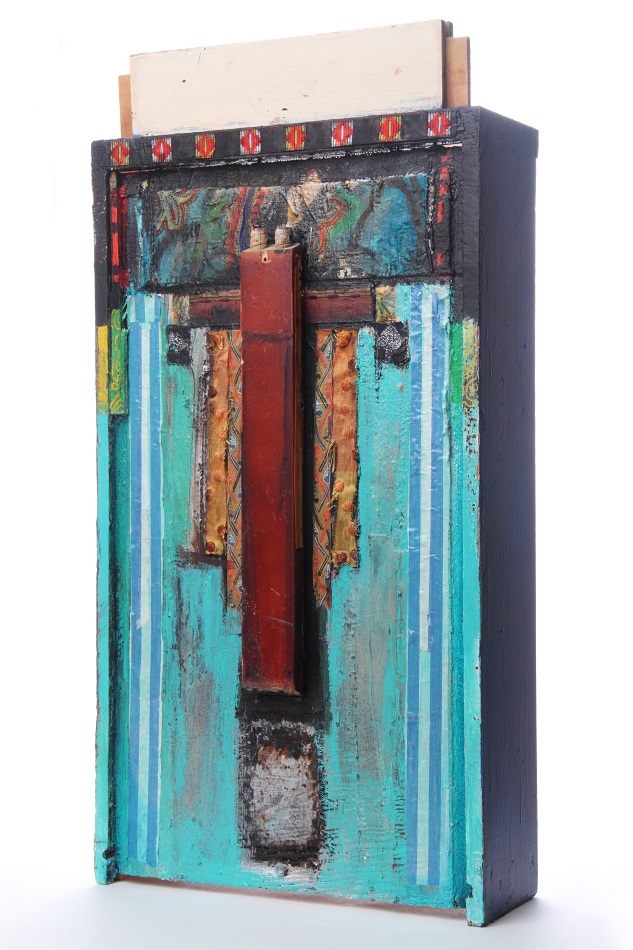 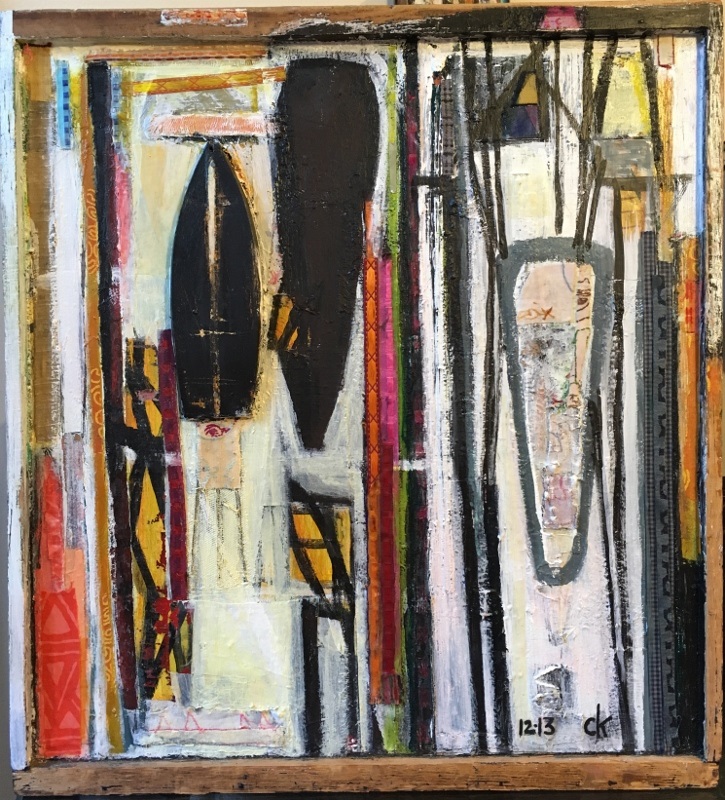 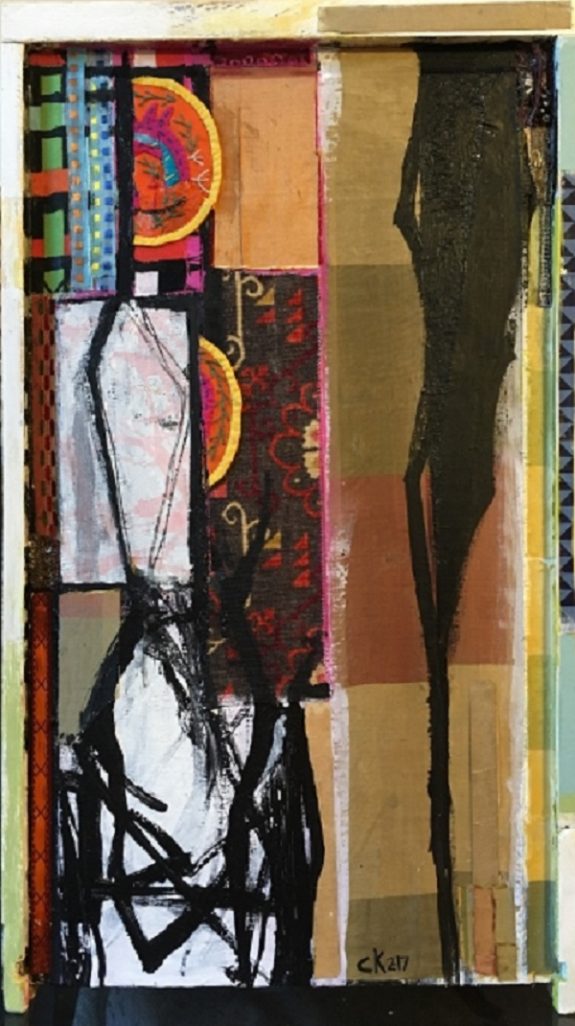 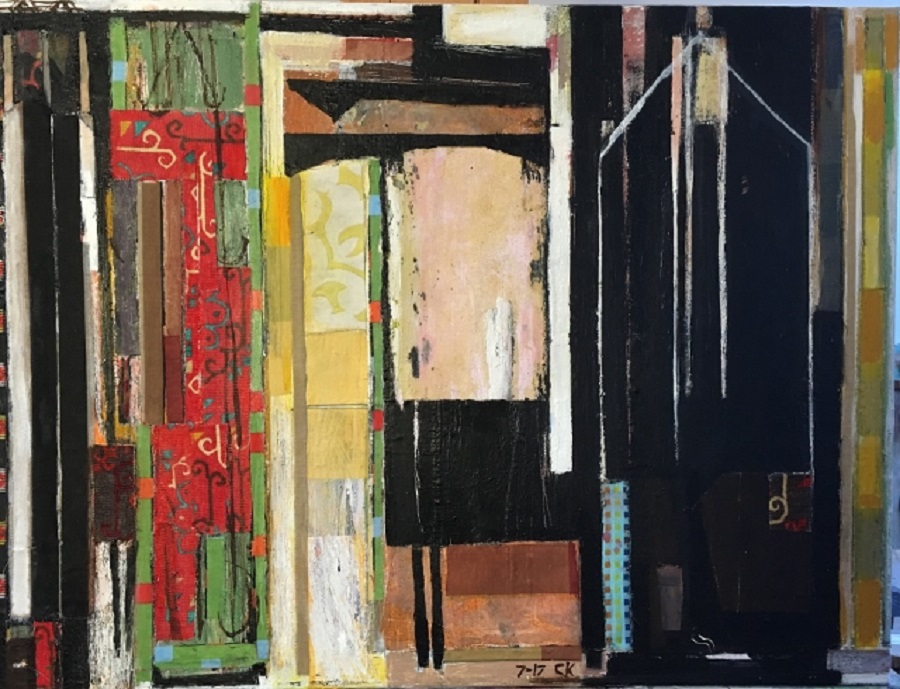 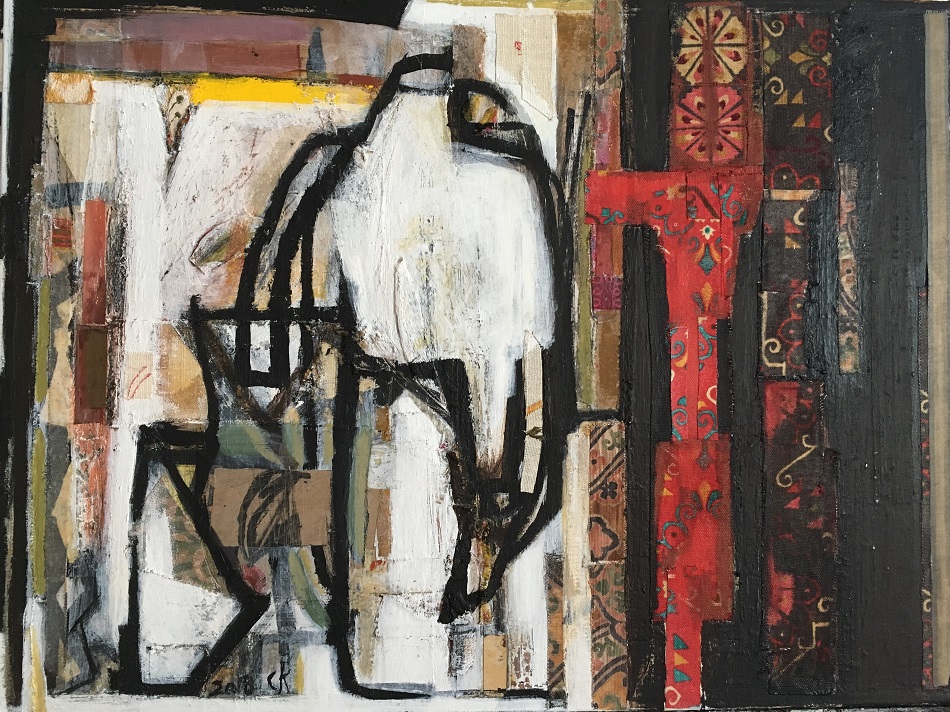 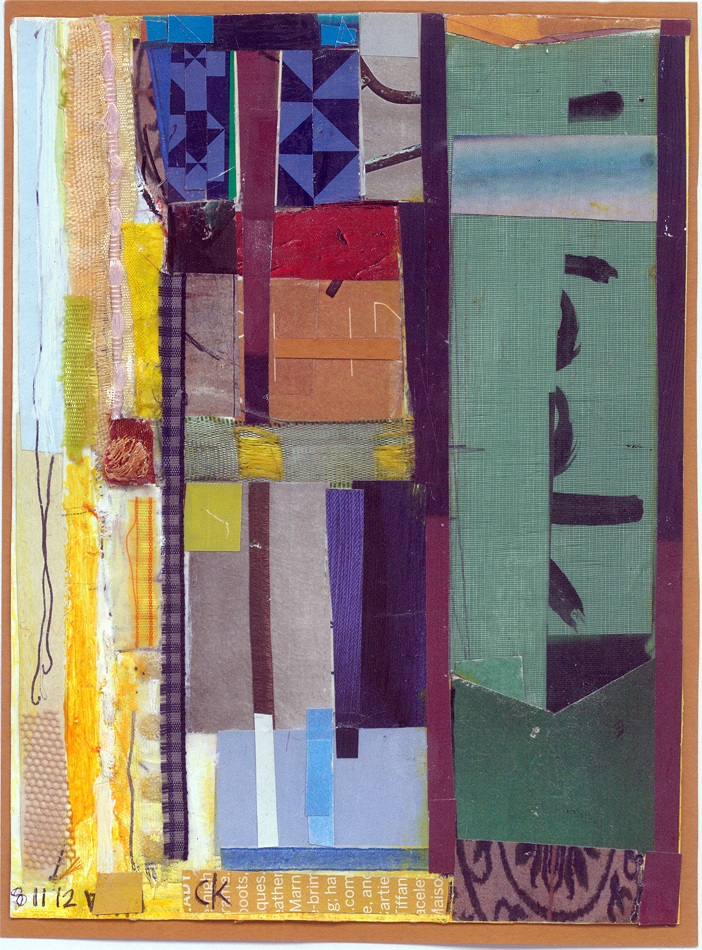 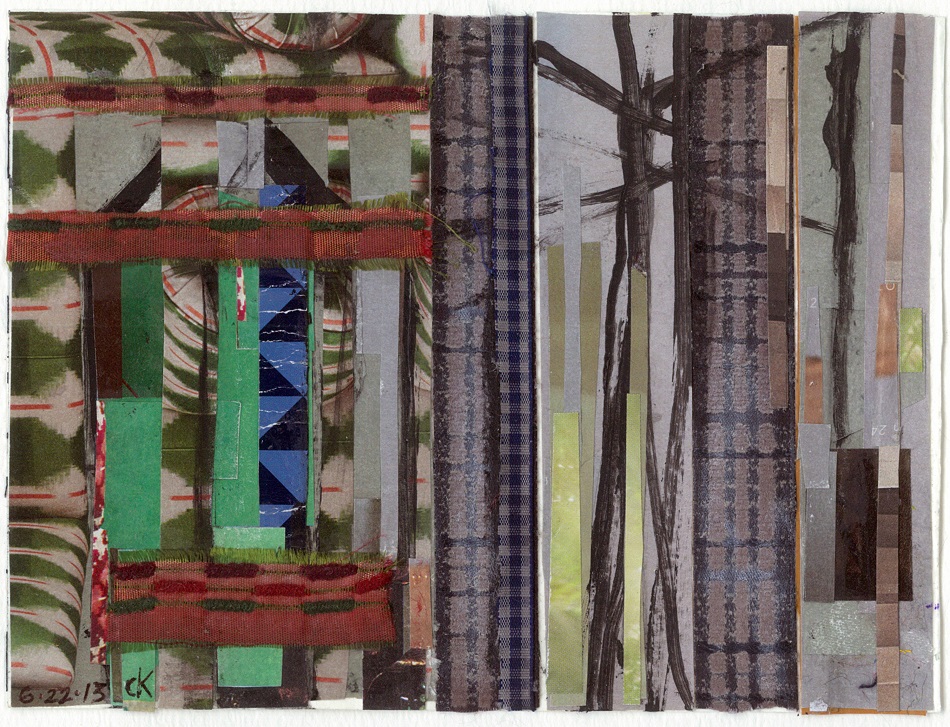 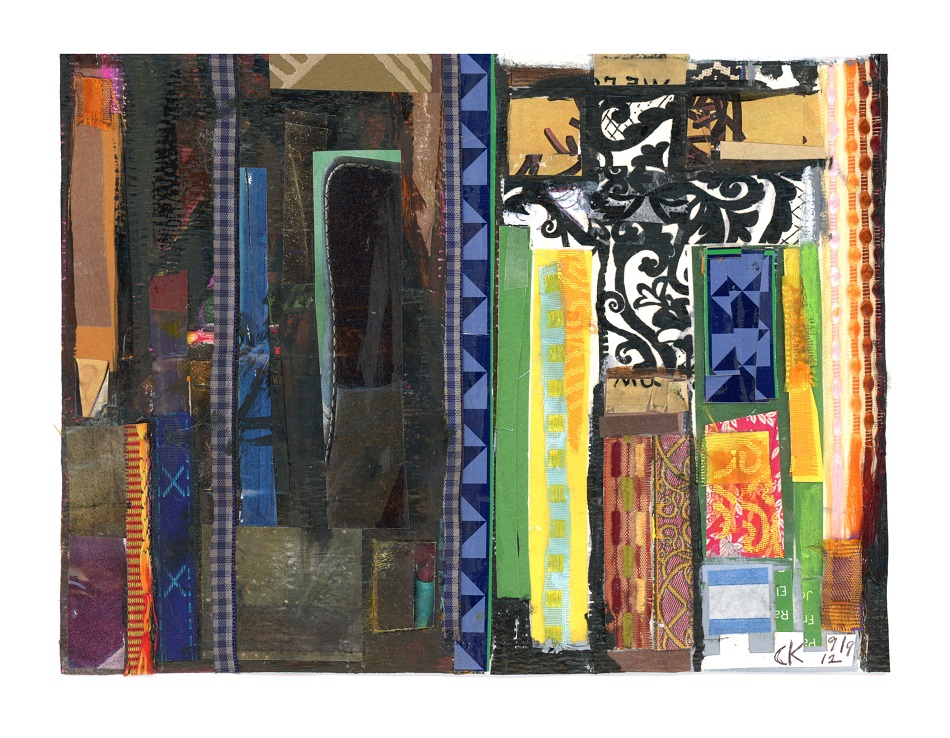 artist statement
My paintings are visual fictions. They are non-narrative tales that are
deciphered by the subconscious. When my work is successful, it conveys
an intimacy that is mysterious and not easily defined because these fictions
are not telling a specific story; they are the actions and reactions to
experience and observation.

I paint on and use found objects and collage because the elements of
chance and the accidental mirror the process of discovery in how I work.
The process of adding and removing, painting and scraping, takes the
pieces through multiple stages that leads to discovery. My job is to witness
that moment of insight and rescue it, not unlike the method I employ when I
decide what piece of trash I salvage from the street, or along my way.

I am Armenian-American, the offspring of a people whose history is rooted
in Diaspora. My intuitive response to this lack of place and the negation of
history, by some, is to make objects that trace to, and build onto, a
collective memory. 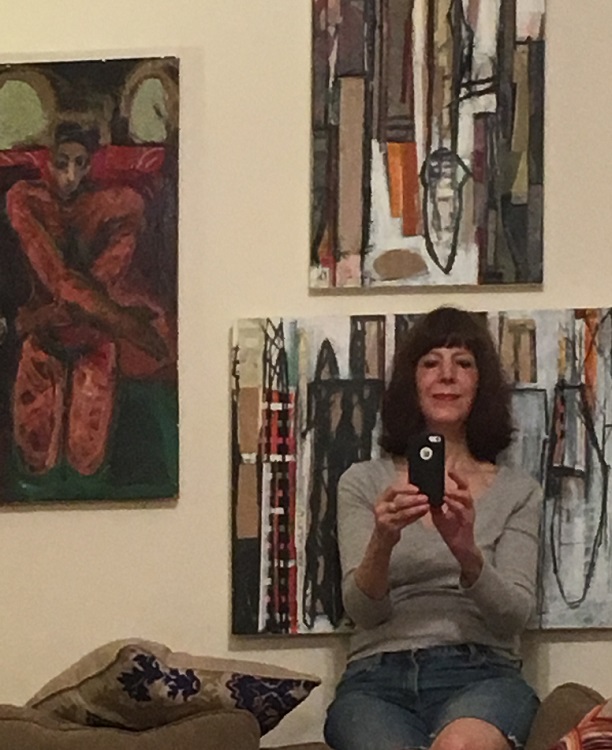 biographical note:
Accomplished Armenian-American visual artist Christine Karapetian was born in the Bronx and raised in Maryland. She was a painting major at MICA primarily because her beloved father “loved Beethoven, Paul Taylor, Matisse, and theater–thereby exposing her to glimpses of the sublime.” After a BFA in painting/art, she moved back to NYC, “place of family lore–home to possibilities, love,” a one-person museum exhibit–followed by “sporadic creative output, motherhood, and the eventual escape to the center of the country to find what was always there, like Dorothy.” Now, truly back to her art, her “spiritual calling”–living and working in Jackson Heights. Her most vivid childhood memory still–is of making collages in kindergarten. “I snip, I glue, I scrape, I paint, I make things—things that, when they work, remain a lovely mystery to me.”

Christine can be contacted by email: ckara0909@gmail.com. Her works of art are for sale.

links to more of Christine’s art:
link to The Sketchbook Project

link to Armenia:Art, Religion, and Trade in the Middle Ages

There are currently no comments.